I visited the Biennale in a very wet November when the so called ‘spring’ tides meant that the streets were flooded twice a day as the canals overflowed their banks. Wellington boots or bright blue pull-on galoshes were de rigueur.

The ‘must see’ show outside the Biennale was Damien Hirst’s ‘Treasures of the Unbelievable’ at Palazzo Grassi. The concept if fun and compelling: a freed slave named Cif Amotan ll (anagram of ‘I am fiction’) having amassed a fortune, set sail in the ‘Unbelievable’ with his treasured collection. The ship-wreck was supposedly salvaged by Damien and his crew. Underwater footage documents the retrieval of the various precious artefacts which include gold, marble and lapis lazuli statues and carvings of sea forms, many encrusted with fake corals and other sealife. It is all so kitsch and obviously sending up the current climate of consumerism and avarice.

Some pieces are extraordinarily beautiful and carved from precious minerals such as this one one of Medusa’s head in jade: 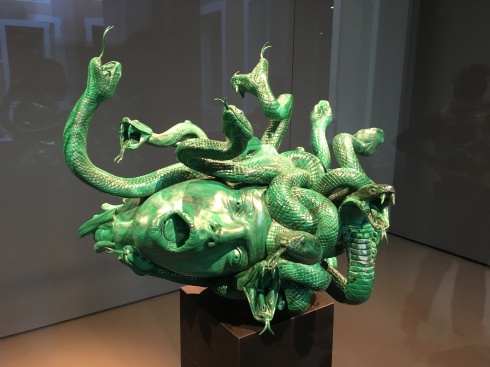 The show came together for me in the room which housed the ‘scale model’ of the ‘Unbelievable’ in a glass museum case, surrounded on the walls by identically framed drawings of the relics in pencil, charcoal, ink and conte on aged paper or velum, many signed ‘In my Dreams’ (another anagram).

The show questions authenticity, what is fake, idolatry, belief, value, and consumerism. My main criticism is that the show was too big, there was so much repetition of the message that it became boring. Presumably Damien will have no problem selling the exhibits.

It is interesting that this show coincided with increasing concern about Venice itself becoming submerged under the waves in the future as a result of climate change and rising sea levels.

There are two main biennale sites: the Giardini and the Arsenale, which are reached by walking along the wet canalside or by water taxi. A 24 hr entry ticket cost 22 euros with student discount.

I am impressed by the complexity of some of the exhibits, especially Olafur Elliason’s ‘Green Light’ – a workshop for refugees, migrants, asylum seekers, students and other visitors who are invited to take part in the manufacture of complex lampshades formed from polyhedral unis with green LEDs. There are areas for relaxing, talking, construction tables, shelving and sculptural works on various scales built from the polyhedral modules.

Hassan Sherif’s ‘Supermarket’ was the accumulation of 30 year of collected works displayed on supermarket shelving behind perspex. These were ordinary, throw-away objects carefully packaged in cardboard or tied up with string in bundles. It seemed a timely comment on our consumer society where we so readily discard things we no longer need.

At the Artesenale the Pavilion of the Earth exhibits most closely reflected my ideas. Charles Atlas : The Tyranny of Consciousness, and Chai overwhelmed the entrance. Huge screens showed simultaneous videos of the sun setting whilst a clock counted down to the moment, accompanied by a loud foreboding commentary. One was reminded of soothsayers of the path telling of the end of the world.

Julian Charrière’s Future Fossil Spaces features ‘white petroleum’ – the potential curse of the future. I wandered through the forest of beautifully layered, glistening pillars of salts from lithium evaporation ponds interspersed with cubes of green resin, contemplating a world without trees.

Michell Stuart is recognised as a pioneer of Land Art and has been illustrating ‘natural histories’ since the 1960’s. She collects objects and soil on her travels which she uses to document the place, and accumulates vintage photographs to create thesauruses devoted to a particular subject. In ‘Ring of Fire’ photographed here, sixty photographs and artefacts from the South Seas have been displayed. The exhibits were very delicate, precious and beautiful.

Lilian Porter’s ‘Man with an Axe’ small scenes are played out amongst the debris of shattered objects and spilt substances. It could be a microcosm of the human condition, the world’s mess enveloping humanity.

A series of National Pavilions showed some stunning collections of work by various artists. I was most taken by the Chinese Pavilion in which a collaboration of craft masters with contemporary artists had created ‘A Network of Intertextual and Collective Creation’. There were shadow play puppets, videos using calligraphy and ink drawings, and extraordinary silk embroideries depicting seascapes and landscapes.

There were so many exciting exhibits – too many to mention. But the quieter pieces tended to touch my soul.

The sun did shine eventually, giving us the classical images of fading Venice reflected in the canals:

I will leave you with my photograph of Lorenzo Quinn’s sculpture of two gigantic hands emerging from the depths of the Grand Canal to support the walls of hotel across the water from ours. It is my most vivid memory of a Venice crumbling into the rising seas.

© Judy Harington and judyharington@wordpress.com, 2011. Unauthorized use and/or duplication of this material without express and written permission from this blog’s author and/or owner is strictly prohibited. Excerpts and links may be used, provided that full and clear credit is given to Judy Harington and judyharington@wordpress.com with appropriate and specific direction to the original content.